An overview of cervicogenic vertigo, or dizziness which is a type of vertigo caused by issues with your neck (hence, cervical) and some disturbances with vestibular system. We have researched everything from possible causes and related inner mechanisms to understanding how a diagnosis is to be properly done. We've spent some effort to convey our findings in a "digestible" way while paying attention to retain important details.

TRY OUR BEST SOLUTION FOR VERTIGO, HEADACHES, AND MIGRAINES - THE VERTIGO KIT

The Vertigo Kit is a combination of natural Homeopathic, Nutraceutical and Bio-energetic ingredients. 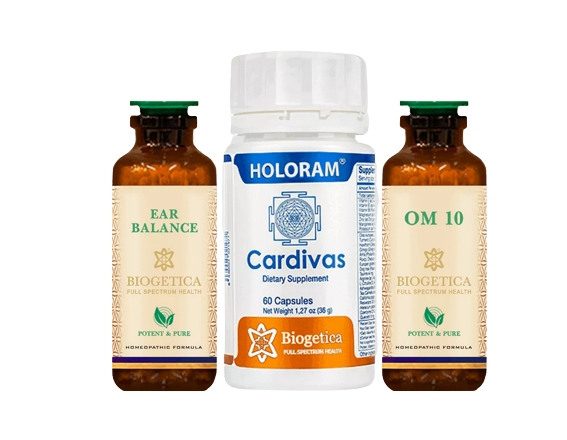 73% of recurrent vertigo patients on a herb trial for 2 to 45 days reported to have all their symptoms improved and had no relapse in the follow up period (Institute for Traditional Medicine, Portland, Oregon 2022)

The etiology of cervicogenic vertigo can be traced to pathophysiological changes in the inner ear, head or neck region.

A relatively new classification in medical literature, diagnosis of cervicogenic dizziness frequently leaves patients wondering how the neck can possibly cause dizziness—which is easily explained:

Anatomically-speaking, neck muscles and joints contain tiny receptors whose job it is to continuously send signals to the brain, eyes, and inner ear (the “vestibular” apparatus) about head orientation: specifically, where the head is in relationship to the rest of the body.

The vestibular apparatus (part of a larger system responsible for controlling eye movement, muscle coordination, and general balance) relies on the eyes and mechanisms of the inner ears to inform the vestibular system as to the relative position of the head to one's surroundings.

Should any aspect of this system malfunction, inaccurate information is sent to the brain, causing sensory confusion; the physiological condition we refer to as “dizziness” or “light-headedness.”

Thus, if the neck (which is directly involved with this regulatory system) is experiencing stiffness or limited range-of-motion, the information it relays to the brain will be less than accurate.

Sometimes likened to carpenter's bubble level, if the orientation between the eyes, ears, and brain are not aligned, the information conveyed to the brain will not be a true reading of physical orientation.

Among the symptoms commonly associated with cervical vertigo are:

Symptoms are usually aggravated while standing up all of a sudden, during rapid neck movements, physical exercise, coughing and even sneezing.

At its most aggressive, cervicogenic dizziness can be quite disabling, with symptoms including:

Cause of cervical vertigo

Numerous mechanisms have been put forth as the potential causes of cervical vertigo.

Spasm of the vertebral arteries can occur due to their close association with the sympathetic trunk (Bogduk, 1986).

Vertebral arteries can also be damaged at the points in the upper cervical spine region, due to stressful stretching such as weight lifting that causes the vertebral artery to rupture.

It is interesting to note that sensory information from the neck is combined with vestibular and visual information to determine the position of the head on the neck, and space during routine life activities. Thus, abnormal sensory inputs as in case of tight neck or tension neck might increase input from muscle proprioceptors, and cause dizziness ( Koskimies et al, 1997). Similarly, whiplash injuries can also trigger deficits in reproducing neck position and inaccuracy in assessing neutral neck position (Loudon et al, 1997).

Cervical cord compression caused due to interaction of the ascending or descending tracts in the spinal cord with the cerebellum, vestibular nucleus or vestibulospinal projections is one of the chief reasons for cervical vertigo (Benito-Leon, 1996 and Brandt 1996).

It has been shown that leak of the cerebrospinal fluid due to tear of cervical root sleeve can lower the CSF pressure and cause dizziness and headache (Schievink et al. 1998).

It is suggested that any damage to the alar ligaments could cause cervical vertigo due to rotational instability in the craniocervical junction. It has been suggested that asymmetrical injuries could cause interaction of the neck with other types of vertigo resulting in dizziness. Further, it has also been shown that neck injury and pain can trigger migraine, and migraine can in turn cause episodes of Cervicogenic migraine induced vertigo. Injuries to the neck that damage structures associated to the ears, especially, the inner ear can also cause vertigo.

Also, it's worth to mention Cervical Spondylosis (neck arthritis or cervicogenic osteoarthritis) - age-related condition developed from wear and tear in cervical spine (neck). It affects joints and discs in your neck. Vertigo from cervical spondylosis is not a widely accepted phenomenon. If you'd like, you can read more about it here.

Accurate diagnosis of cervical vertigo is possible primarily only by effective elimination of the other causes of vertigo such as vestibular neuritis (or, neuronitis), BPPV (benign positional vertigo), Meniere's disease, central vertigo and psychogenic vertigo.

Cervical vertigo associated with head injuries and neck injuries such as post traumatic vertigo, whiplash injury or severe arthritis should be definitely taken into account during diagnosis.

Although diagnosing cervicogenic dizziness can be relatively simple when physical symptoms are present and apparent (stiff neck, limited range-of-motion), assessing cause and severity can be tricky—as well as the choosing of appropriate treatment. While a stiff neck can result from an accumulation of stress or by simply sleeping with one's head in an awkward position, it can also be indicative of more serious conditions like a blocked artery, pinched nerve, prolapsed disc, or in rare cases, a potentially serious disease called meningitis (an infection of the membranes surrounding the brain and spinal cord, usually accompanied by headache, vomiting, fever, and abnormal sensitivity to light).

Additionally, when cervicogenic dizziness is a product of whiplash (following a moving vehicle accident), assessment of the severity of whiplash must precede (and even preclude) treatment.

Note: In that there are as yet no diagnostic tests designed to scientifically confirm cervicogenic dizziness, it is typically assigned to individuals who have experienced neck injury (with associated pain) and are complaining of dizziness, and for whom other causes of dizziness have been ruled out. Generally, individuals diagnosed with this condition tend to complain of dizziness that worsens with head movement or after maintaining one head position for an extended period of time (and often accompanied by headache). In most cases, the symptoms associated with cervicogenic dizziness (which can last minutes or hours) will decrease if neck pain is alleviated.

Physical examination of cervical vertigo cases reveals no spontaneous nystagmus, though there may be upbeating nystagmus supine (Hozl et al, 2009). Use of VNG test instead of ENG has been proved useful to document nystagmus associated with herniated disks when the head is turned upright. Head-Turning Upright Test is an important diagnostic procedure for cervical vertigo (Cherchi and Hain, 2010).

Laboratory tests include ENG, VNG, Audiogram, VEMP, OAE, Posturography, MRI-neck and brain and flexion/extension x-rays of neck. CT-angiography is being widely employed recently for detection of vertebral hypoplasia in cervical vertigo. Selective vertebral angiography has been the "gold standard test" for the cervical vertigo caused on account of compression of the vertebral arteries. MRA, Vertebral Doppler and Fluoroscopy of the neck are the other procedures in use (Sakaguchi et al. 2003). Dynamic Posturography has off late gained preference for the diagnosis of cervical vertigo (Kogler et al, 2000 and Alund et al, 1991).

Manual therapy has been a recent addition that has been shown to help cervical vertigo (Lystad et al, 2011).

In the absence of more serious or contradictory symptomology, treatment of cervicogenic dizziness typically involves methods to correct the orthopedic dysfunction causing the sensory confusion; essentially, the restoration of pain-free, full range-of-motion of the neck muscles and surrounding joints through one of several commonly-used techniques.

‍Though many doctors opt to prescribe anti-dizziness drugs like Antivert for this condition, this approach is generally thought contraindicated in that such drugs do not address the underlying problem [which can lead to exacerbation of the injured area], and can limit the brain's natural ability to adapt to new conditions, and can lead to medication dependency.

In many cases, treatment for cervicogenic dizziness can be as simple as application of heat and/or ice packs, gentle massage/manipulation, stretching exercises, or basic neck/spine alignment (of a chiropractic style).

Additionally, in cases where this condition has been brought on by bad posture, general lifestyle changes may be in order (including instruction in proper posture and use of the neck), or in cases where the vestibular apparatus is malfunctioning (discovered through examination), eye exercises, balance/rehabilitation exercises, and/or walking exercises may be prescribed.

Although cervicogenic dizziness can usually be corrected within a relatively short period of time (a few days), a number of factors can affect total recovery time including the patient's overall physical condition, medical history, lifestyle, and general health, as well as preexisting conditions such as chronic migraines, P.O.T.S (a condition in which a change from the reclining to upright position causes a dangerous jump in heart rate, drop in blood pressure, and fainting), and fibromyalgia (as well as other forms of arthritis).

Here's the video that may help you to understand the problem all visually:

Symptoms:
Vertigo
Dizziness
Vestibular
Migraine
Neck pain
Headache
Fatigue
Anxiety
Pain in the back of the head
Pressure in the head
Ringing in the ears
Vision problems

‍weekly newsletter to navigate the confusing world of vestibular disorders, migraines, vertigo, and all things related.
Thank you! Your submission has been received!
Oops! Something went wrong while submitting the form.

I hope you've found what you've been looking for.

Info
BlogContact
About me
Learn More
Want to read our posts in your inbox?
Thank you! Your submission has been received!
Oops! Something went wrong while submitting the form.